PLEASE CONSIDER DONATING TO THE ACTORS FUND, FOR EVERYONE IN ENTERTAINMENT: https://www.justgiving.com/fundraisin…

Another Day of Sun

January 3, 2021 / RyanFordBass / Comments Off on Another Day of Sun

October 20, 2015 / RyanFordBass / Comments Off on “Poucha Das” by François Rabbath

“I Had a Dog” by David Jaggard

A Coney Island of the Mind by Anthony Cornicello

May 31, 2015 / RyanFordBass / Comments Off on A Coney Island of the Mind by Anthony Cornicello

Composer Anthony Cornicello conducts his jazz-inspired chamber work for voice, small ensemble, and electronics. Composed in 2008, the piece uses six poems from A Coney Island of the Mind by American poet Lawrence Ferlinghetti. Cornicello is Professor of Music at Eastern Connecticut State University. Presented in conjunction with Coney Island: Visions of an American Dreamland.

Coney Island of the Mind, performed at the Wadsworth Atheneum, Hartford, CT on May 17, 2015. Performers:

“Hints and Hauntings” by Kirsten Volness

September 23, 2011 / RyanFordBass / Comments Off on “Hints and Hauntings” by Kirsten Volness 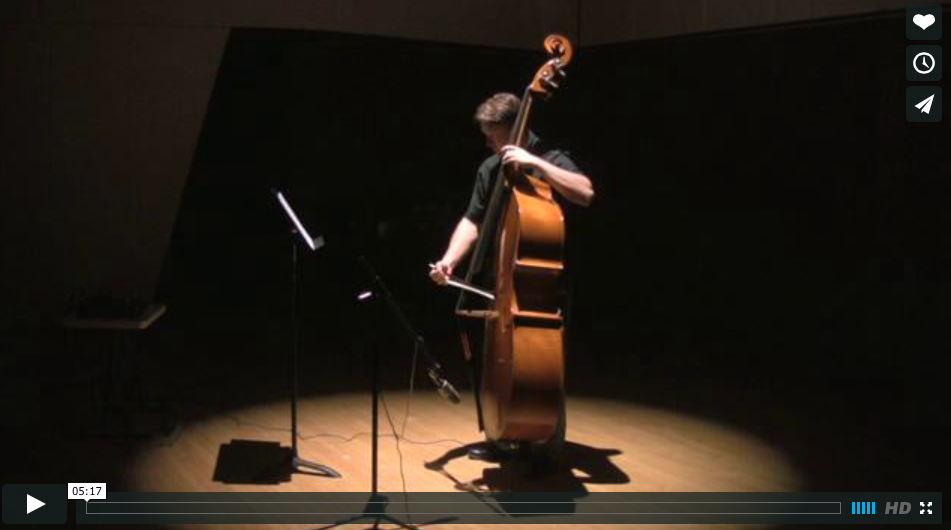 Hints and Hauntings (Pixilerations) from Kirsten Volness on Vimeo.

Performed at PIXILERATIONS [v.8] new media festival in Providence, Rhode Island (USA). PIXILERATIONS investigates the state of new media arts through installations, performances and film/video screenings. It is part of the larger FirstWorks Festival (first-works.org), a multidimensional performing arts festival in Providence each fall. Pixilerations is produced by FirstWorks in collaboration with the Rhode Island School of Design (RISD), Brown University, and the City of Providence’s Department of Art, Culture + Tourism. Now in its eighth year, Pixilerations is one of the foremost venues for new media artwork in New England.